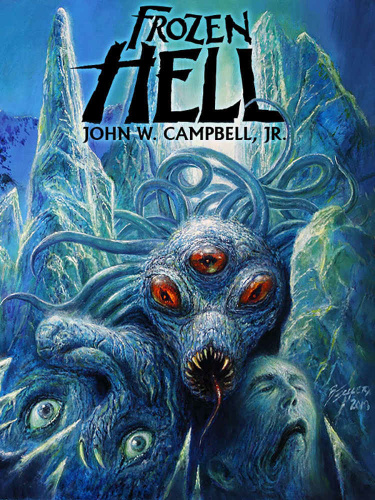 Descirption: An Antarctic research camp discovers and tha the ancient, frozen body of a crash-landed alien. The creature revives with terrifying results, shape-shifting to assume the exact form of animal and man, alike. Paranoia ensues as a band of frightened men work to discern friend from foe, and destroy the menace before it challenges all of humanity!
The story that inspired John Carpenter's 'The Thing'!
In 1938, acclaimed science fiction author John W. Campbell published the novella "Who Goes There?," about a team of scientists in Antarctica who discover and are terrorized by a monstrous, shape-shifting alien entity. The story would later be adapted into John Carpenter's iconic movie "The Thing" (following an earlier film adaptation in 1951). The published novella was actually an abridged version of Campbell's original story, called "Frozen Hell," which had to be shortened for publication. The "Frozen Hell" manuscript remained unknown and unpublished for decades, and it was only recently rediscovered. "Frozen Hell" expands the "Thing" story dramatically, giving vital backstory and context to an already incredible tale.
DOWNLOAD